It was the middle of June, 1967, when I arrived in San Francisco. I hadn’t stopped to see my friend Silk, thinking I would do that after spending a couple of days in the city. I had to see what was happening there since there was so much talk about free drugs, sex and lots of rock and roll, perfect for someone like me with an insatiable appetite for all three. I figured it wouldn’t be very hard to find a cute hippie girl I could crash with, and I was right. 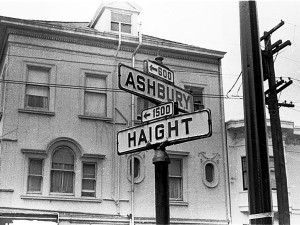 I parked on some side street a couple of blocks from Haight and Ashbury, walked up to Haight Street and then the few blocks to Ashbury. It was crazy . . . jammed with hippies everywhere. Within the hour I met a red-headed, freckle-faced, lovely, and stoned out Melinda. First thing she did was to offer me a fresh flower for my hair, give me a hug and kiss, and hand me a big fat joint. I spent the next three or four days with her at a little apartment she shared with Tony, Rainbow, and Moonbeam.

Tony and Moonbeam were a very free-loving young couple who had everything they needed to just hang out and never worry about money. Both of them came from very wealthy families that had set them up with generous trust funds which they were now using to help whoever needed it. That was the case with Melinda, whom they had welcomed into their little love nest, and now I was added into their mix. The first night with them was spent listening to great music from the local bands they wanted to turn me on to. I think I ended up staying there for about two weeks, most of the time pretty smashed, but loving every minute.

Melinda was a sweet girl, but was never really able to hold my attention except when we were in bed, or on the couch, or on the floor, or anywhere else we ended up entangled in each other’s arms. Tony and Moonbeam were usually out, and one day Melinda had to go somewhere with her parents which left me alone with Rainbow.

Oh bright burning Rainbow! She loved music, she loved to dance, and she loved to make love. She introduced me to the incredible Jefferson Airplane as she danced and gyrated all over me to the rhythmic sounds of Grace Slick singing “Somebody to Love.”

Because I ended up staying longer than I had planned, I was able to catch a few shows that introduced me to the San Francisco rock and roll scene. Although I had already been introduced to some of the better known bands that I’d been fortunate enough to catch at Thee Experience or the Whisky back in L.A., I quickly discovered that there were plenty of bands, mostly local underground bands, that I thought were excellent.

There was The Sons of Champlin that I would cross paths with again in a few years. I actually caught Sopwith Camel perform, I believe, at The Matrix on Fillmore Street. Their hit song “Hello Hello” was not my cup of tea, but it was, if not the first, then one of the first hits from a San Francisco band…….