By the end of January ’72, we had completely plotted out every aspect of our “A Night of Rock and Roll, Magic, and Mime” concert and had negotiated with the Palace of Fine Arts to allow us to present a benefit for the Ali Akbar Khan School of Music. It was to be an evening of classical Indian music blended with a touch of rock and roll and mime, featuring Shanti, Ali Akbar Kahn, Shankar Ghosh, Robert Shields, and Will Pate.

The concert date was set for Friday, February 25, 1972. Everyone at P.M.I’s offices worked tirelessly to arrange and organize all the myriad details that it takes to put on a presentation of that magnitude. We contacted and signed agreements with all the acts, as well as all concert staff and security personnel. 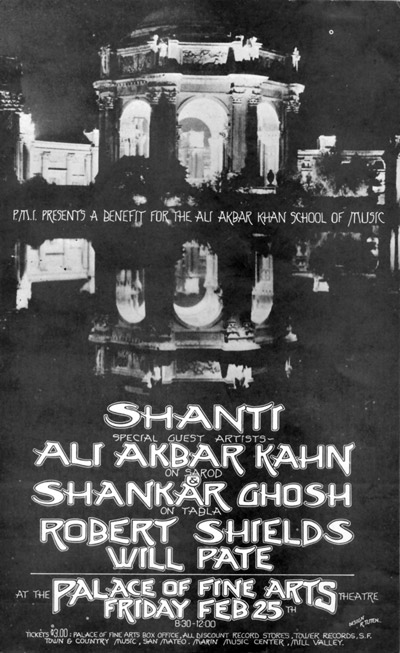 All local ticketing agencies were contracted, even Tower Records jumped in and sold tickets for us. Posters and flyers were designed by Randy Tuten that to this day remain collectors’ items.

We sent out private invitations to all VIPs, including, of course, Peter Marino. We arranged for several of our models from the Paris Collection of Models, wearing all the latest fashions from the hottest San Francisco boutiques, to introduce the performers. We sold out the Palace and we put on a show that blew everyone away.

There were several heavy-weight music agents and a few Hollywood film producers who offered me their business cards and invited me to all sorts of events coming up in Hollywood. I received numerous accolades, a cornucopia of drugs, and dozens of invitations for after-show parties at some of the local venues and private homes.

John Cestare, a film producer-actor-director acquaintance of mine from Hollywood had shown up with one of his actresses, and Kathy and I were intrigued by his offer for us to come to Hollywood. He proposed that Kathy could be in his films and he and I could delve into bigger and better concert productions. I made a promise to him that I would consider his offer and would contact him soon. I knew then that some changes were coming.

Since the scene with my San Francisco investors seemed to be drying up due, I believed, to their families not wanting them to get too deeply involved with what they rightly considered this wild and unpredictable business of sex, drugs and rock and roll, John’s offer seemed like perfect timing.

There were a lot of loose ends to tie up, but we managed to wrap things up rather quickly to the satisfaction of everyone involved, including all legal aspects with the offices, car leases, and even our home. We issued a sixty-day notice and began the clean-up. Within a couple of months, we closed the offices, packed up the house, said goodbye to San Francisco, and once again headed south to LaLa Land. ….